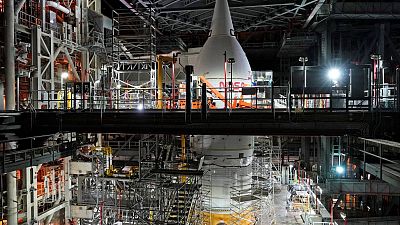 NASA’s Artemis mission to put astronauts back on the Moon by 2024 is running late and getting expensive, an assessment by the space agency’s watchdog has found.

A new report by NASA’s inspector general (OIG) found that the agency was likely to overshoot its 2024 target by “several years” as knock-on delays and technical challenges impacted the mission’s timetable.

The OIG also criticised the cost of the Moon landing project, saying NASA “lacks a comprehensive and accurate cost estimate” of the programme.

Last week, the US space agency pushed back the expected date for a lunar landing to 2025. The delay was due in part to legal action by Jeff Bezos-owned Blue Origin, which sued NASA after losing out in a bid to build a Moon landing vehicle for the Artemis programme.

In a statement, NASA said the US Congress had not allocated the agency “sufficient funds” to award contracts for Moon landing vehicles to more than one private company.

NASA said the delay was also down to “first-time development challenges,” and the 2024 deadline set by the former Trump administration “not being technically feasible”.

In its report, the OIG found that NASA uses a rough estimate for the cost of the first three Artemis missions “that excludes $25 billion (€22 billion) for key activities related to planned missions beyond Artemis III”.

The report also accused NASA of “failing to develop an official cost estimate” for the Artemis programme and said it was “underreporting the true funding requirements” of the exploration project.

NASA’s cost estimate for the programme excluded spending on development of the Space Launch System (SLS) – the replacement for the Space Shuttle launch vehicle that was retired in 2011 – as well as the Gateway, a space station orbiting the Moon that is planned to serve as an outpost for astronauts on the Artemis programme.

In its cost estimate, the OIG said NASA was likely to spend $93 billion (€82 billion) on the programme by 2025 and faced a $4.1 billion (€3.6 billion) cost-per-launch for at least the first four Artemis missions.

In a written response, NASA said it had restructured its Human Exploration and Operations Mission Directorate organisation to ensure effective management and that it agreed it should look for “measurable cost reduction targets” in its Exploration Systems Development arm.

When will we land on the Moon?

Artemis I, the first stage of the lunar landing mission, was originally scheduled to blast off this month, but NASA’s own estimates have pushed the launch of the uncrewed lunar orbiter to February 2022.

The OIG report is more cautious, saying Artemis I has a “higher probability of launch – in our estimation – by summer 2022”.

Artemis II – which will see a human crew fly 40,000 miles beyond the Moon before returning to Earth – faces knock-on delays from the Artemis I mission, the OIG said.

A key issue for the mission is the availability of parts. To save money, NASA plans to re-use parts of the Orion spacecraft used in Artemis I for the follow-up mission.

Delays to Artemis I could therefore set back subsequent launches.

“NASA is likely to face schedule delays due to the reuse and installation of Orion components following Artemis I and a tight delivery schedule of the Orion service module,” the OIG report said.

Artemis III, the mission that would see humans set foot on the Moon for the first time since 1972, faces numerous issues of its own.

A moon lander due to be built by Elon Musk’s SpaceX is likely to be delayed by 3.4 years, according to an OIG estimate based on previous space flight development programmes and delays caused by Blue Origin’s lawsuit.

NASA’s efforts to develop the next generation of spacesuits is another bottleneck, the OIG said, after the agency was forced to fast-track its schedule to meet former president Donald Trump’s 2024 moon landing deadline.

“The suits will not be ready for flight until May 2025 at the earliest,” the report stated. ( Source: https://www.euronews.com/next/2021/11/16/nasa-artemis-moon-landing-delayed-by-several-years-as-costs-go-underreported )