Charred remains of fire on Apollo 1 that killed three astronots….so the story goes..

Just before we sent a man to the moon, as the official story goes, there were many mysterious deaths of Apollo candidates for the Moon shot. Were they silenced because they could not be mind controlled or counted on to keep the Great Lie going?

Apollo/Satan and his fall from Heaven.

Apollo is a powerful God which has inspired several “demonic” or Abyssic Gods. Known as Helios by Nero Caesar, Phoebus or “Shining,” Apollo is the twin brother of Artemis (Diana). His center of worship was at was at Delphi and was renowned throughout the ancient world for its oracular advice delivered by a priestess called the Pythia the Chthonic serpent/dragon.

Nero Caesar and Domitian actually considered himself a manifestation of Apollo as he is the God of Illumination, Light, Music, Medicine and more. His arrows send plague and death which earned him the Biblical name of Apollyon or Abaddon, the King of the Bottomless Pit/ Lucifer.

“Apollo” is another name for Satan or Lucifer.

Isn’t it odd that NASA would name its first exploration of another celestial body after the great deceiver of men himself, Satan?

Deaths of key people involved with the Apollo program In a television program about the hoax theory, Fox Entertainment Group listed the deaths of 10 astronauts and of two civilians related to the manned spaceflight program as having possibly been killings as part of a coverup.

•Robert Lawrence, scheduled to be an Air Force Manned Orbiting Laboratory pilot who died in a jet crash in December 1967, shortly after reporting for duty to that (later cancelled) program.

•NASA worker Thomas Baron Train crash, 1967 shortly after making accusations before Congress about the cause of the Apollo 1 fire, after which he was fired. Ruled as suicide.

•Paul Jacobs, a private investigator from San Francisco, interviewed the head of the US Department of Geology in Washington about the ‘moon rocks’. Did you examine the Moon rocks, did they really come from the Moon? Jacobs asked – the geologist did not respond, only laughed. Paul Jacobs and his wife died from cancer within 90 days.

•Lee Gelvani claims to have almost convinced James Irwin, an Apollo 15 astronaut whom Gelvani referred to as an “informant”, to confess about a cover-up having occurred. Irwin was supposedly going to contact Kaysing about it; however he died of a heart attack in 1991, before any such telephone call occurred. Spacecraft testing and flying high performance jet aircraft can be dangerous, and all but one of the astronaut deaths (Irwin’s) were directly related to their rather hazardous job. Two of the astronauts, Mike Adams and Robert Lawrence, had no connection with the civilian manned space program. Astronaut James Irwin had suffered several heart attacks in the years prior to his death. There is no independent confirmation of Gelvani’s claim that Irwin was about to come forward. Moreover, if there was a coverup (that the Apollo 11 and subsequent landings were faked), the coverup would logically have occurred in 1969 and subsequent years – yet all of the deaths listed above occurred in 1967 or earlier.

On 27 January 1967, two years before the first moon landing, Virgil “Gus” Grissom, Ed White and Roger Chaffee were killed in a devastating fire on the Apollo 1 launchpad during a full scale launch simulation. Grissom was greatly liked by his peers, was a strong character, and occupied a central position in the NASA space program. Many had predicted that it would be Grissom who would be the first to walk on the moon.

But Grissom was also an outspoken critic of the program. Among his last words before he died, when there was a communications failure with the capsule just prior to the fire, were: “How are we going to get to the moon when we can’t communicate between two buildings?”

Moments later, the capsule burst into flames with the astronauts sealed inside. They were consumed by the fire with no chance to escape. His widow Betty and his son Scott both still maintain that the astronauts were killed deliberately by sabotage – and that their many questions have never been adequately answered.

Clark McClelland and John Lear insist that there was also a fourth astronaut who died in the capsule, a member of an alternative space program… the “real” one, employing top secret advanced technology, which was highly classified. After the fire, according to McClelland and Lear, a heavy cover-up ensued that continues to this day. (Please see Project Camelot’s interview with John Lear for more details. Lear states that the fourth astronaut’s name is known.)

Thomas Ronald Baron was a safety inspector in Apollo 1’s construction. After the fire, Baron testified before Congress that the Apollo program was in such disarray that the United States would never make it to the moon. He claimed his opinions made him a target, and on 21 April 1967 reported on camera to news reporters that he and his wife had been harassed at home. As part of his testimony Baron submitted a 500 page report detailing his findings. Exactly one week after he testified, Baron’s car was struck by a train and he, his wife and his stepdaughter were all killed instantly. Baron’s report mysteriously disappeared, and to this day it has never been found.

The Apollo program continued, and so did the string of untimely deaths. Between the years of 1964 and 1967 a total of 10 astronauts lost their lives in freak accidents. These deaths accounted for an astonishing 15% of NASA’s astronaut corps.

“How are we going to get to the moon if we can’t talk between two buildings?” Ed Grissom, Apollo 1

The issue of mysterious and untimely deaths also plagues the moon shots. Were whistle-blowers silenced? The January 1967 death of Gus Grissom, along with Ed White and Roger Chaffee in the Apollo 1 fire, is a possibility. One of the more prominent debunkers of the “we-never-went-to-the-moon” crowd has published his “disgust” that Bill Kaysing would suggest that Gus Grissom was murdered in order to silence him.

Who else makes such a “disgusting” claim? Grissom’s wife and son do. They both believe that the Apollo 1 fire was no accident, and that the truth is being covered up. They have evidence that such a notion might be true, and Grissom’s son Scott is calling for an official investigation into the matter as of 2002. Grissom was critical of NASA, hanging a lemon on a NASA simulator before he died.

People associated with the Apollo 1 simulation on the day of the fire remarked on the strange atmosphere that prevailed. Grissom told his wife that if somebody died in an “accident,” it would likely be him, and not because he was accident prone. Straight-talking Grissom apparently made the NASA brass uneasy with his observations. During the Apollo 1 simulation, just before he died, the communications with the Command Module completely broke down, and Grissom said in exasperation, “How are we going to get to the moon if we can’t talk between two buildings?”

Lola Morrow was the astronauts’ secretary. On the show Moon Shot she can be heard describing the atmosphere on the morning of the fire. She described the mood of Grissom, White and Chaffee as one she had never seen before. Before each flight and major event, the astronauts were eager to get to it. Not that day. They obviously did not want to do the simulation.

Clark MacDonald, an engineer working for McDonnell-Douglas, was hired by NASA to investigate the fire. He now has admitted that more than thirty years earlier, NASA destroyed the evidence he gathered, as well as the report he produced, for “public relations” reasons. MacDonald determined that an electrical short started the fire when the battery power was switched on. Grissom’s son Scott was granted access to the Apollo 1 craft, where he gathered evidence that he says pointed to sabotage, and that there has been a cover-up of it. (Source)

Grissom’s death (taking White and Chaffee with him) is not the only strange one. Bill Kaysing thinks that another man was silenced by murder. Thomas Baron was an inspector for North American Rockwell, the contractor that built the Command Module. The astronauts are united in the opinion that what Rockwell produced was of initially poor quality. The astronauts comment on it in Moon Shot.

Baron was not an engineer, and only had a high school education, but was the detail-oriented fanatic that all technical organizations need. His pals gave him the initials “DR,” which stood for discrepancy report. His supervisor ran out of discrepancy report forms regularly, because Baron used so many of them. He was the squeaky wheel. He made some of his findings public, and Rockwell fired him about three weeks before the Apollo 1 fire. Baron originally produced a fifty-five-page report, and finished a 500-page report that he delivered when he testified to Congress in April of 1967.

His testimony received a hostile reception. A few days later he was dead. His car was struck by a train, killing not only himself, but also his wife and stepdaughter. In shades of Casolaro and Wilcher, his death was officially ruled a suicide. It was worse than that, because he did not only “kill” himself, but also murdered his wife and her child. It took some interesting psychology to arrive at that conclusion, going from being overly conscientious to becoming a murderer.

One theory is that he was distraught over the Apollo 1 fire, so he killed himself and his family. I have not heard about anybody else connected to the Apollo program killing themselves or becoming murderers over the Apollo 1 “accident.” How strange that the biggest whistleblower did. Just what are those odds? The 500-page report disappeared, and has not been seen since.

The moon hoax debunkers have lined up behind the official explanation. Jay Windley thinks that Barons’ report has come up missing partly because it had little investigative value, and that Baron may have indeed killed himself, but if he were murdered, it would have been a private contractor, not NASA, and if they wanted to silence him, they should have done it before he testified. Jay may be right, but I have encountered far too many conveniently timed deaths during my investigations to make my suspicion go away, especially when Grissom’s son thinks he was murdered.

Killing whistle-blowers such as Thomas Baron was standard operating procedure for the defense establishment, if it related to military matters. I know people who have been involved in Department of Defense whistle-blowing activities. It could get pretty scary. Sometimes, people would simply “disappear,” Jimmy Hoffa-style.

When billions of dollars are at stake, murdering a few people with “big mouths” or who otherwise stand in the way is standard activity. That is the nature of American-style capitalism. Why should it be different regarding space matters? I was challenged to provide some evidence of what I know about whistle-blowers, and without naming names, this footnote presents a little of what I am aware of.[62]

James Irwin was an Apollo 15 astronaut. He became a Born Again Christian, leading an effort to find Noah’s Ark. According to what I have read and heard, in 1991, Irwin contacted Kaysing to have a chat. Why would Irwin call a “kook” such as Kaysing? Four days after allegedly trying to contact Kaysing, Irwin was dead from a heart attack. Did “Born Again” Irwin want to unburden his conscience? Irwin had heart disease, so that may explain it, but the spooks can apparently induce heart attacks using normally undetectable means. ” 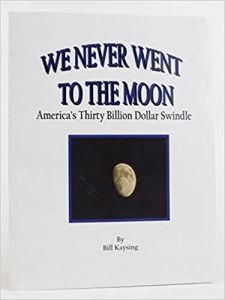