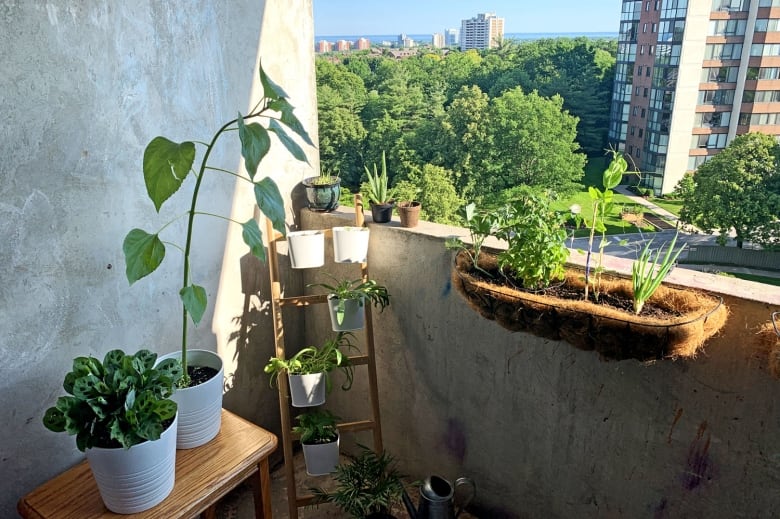 A few months ago, my roommate Alex and I had a revelation. As we were hauling overfilled bags of trash down the hall to the disposal for the third time that week, it hit us: How were four people producing this much garbage?
Our three-bedroom apartment west of Toronto had no compost bin. Our kitchen blue bins were often overflowing with recycling, but it made little difference to the amount of trash. Single-use plastic made up a large part of our weekly garbage run and a lot of it came from packaging for produce. We decided to begin growing our own food.
Most people think that cultivating a garden in an apartment is impossible, especially being eight floors up. Some buildings have strict rules — ours says you can’t hang things off the balcony. But finding workarounds was one of the easiest things I’ve ever done.
We started by creating our own vermicompost bin, which uses worms to compost food scraps. But we quickly realized how much fertilizer the worms were producing. We considered dumping it in a local forest or the flower beds outside our apartment, but decided instead to create a garden of our own.
We ran out to the store the next day, filling our cart with seeds, small compostable pots and a shovel. We began with 10 seed-filled pots sitting on our kitchen windowsill, which we watered every day with a spray bottle. We killed four within the week, but we replanted and adjusted. From over-watering to too much sun, we had to watch our emerging plants like hawks.
Within three weeks, we had 10 little seedlings, including lettuce, tomatoes, broccoli, snap peas, mint, basil, a dwarf sunflower … as well as catnip for our feline friend, Dave.
Never having had much of a green thumb, my roommate and I had plenty of pots from previously owned (and accidentally killed) house plants. This proved beneficial around three weeks later. The plants had become too big and needed to be transferred to new homes.
Soon, we were obsessed. With the leftover pots, we planted more. Some wildflowers for the bees, another sunflower. We even started to plant and regrow the vegetables we were buying from the store.
We moved the plants outdoors the weekend after Victoria Day, putting them in metal and compostable planters hanging on the inside of our balcony. A few weeks later, we bought a wooden ladder and hung pots from it for the flowers. Thirteen weeks after we first had the idea, our once-empty balcony was filled with blooming life.
Soon, the benefits of our garden will be reaped and we will have delicious, fresh food — with no waste in sight.
An apartment garden cheat sheet:
Use the space to your advantage. If you have a balcony, hang planters. If you have a large enough windowsill, keep your plants there. Consider vertical planters to conserve space. Be creative.
If you don’t have enough lighting or lack a balcony, consider using grow lights for minigreenhouses.
If you lack the funds for such equipment, grow veggies that thrive in shady areas (e.g. lettuce, carrots, garlic, potatoes).
For overly sunny apartments, grow tomatoes, cucumbers, peppers, beans and corn.
Watch how your plants grow. If they’re wilting, water them. If they start to lose their colour, give them more light. To grow a successful garden, you have to pay attention to what your plants are saying to you.  (source: https://www.cbc.ca/news/technology/what-on-earth-newsletter-garden-growing-climate-change-cartoon-1.5192851 )